Sinjajevina is an extraordinary mountain pastoral territory that extends over 600 square kilometers in the Dinaric Alps of Montenegro. It is the most extensive mountain pasture in the country and the second biggest in Europe. The land is used by transhumant herders, who move with their animals to spend the summer in the highland pastures of Sinjajevina and return to spend the winter in the valley at lower altitudes. Situated in the central-northwestern part of Montenegro, Sinjajevina is characterized by vast, continuous grasslands at altitudes between 1600 and 2100 m, bordered by the canyons of the Tara and Morača rivers, and surrounded by dense and diverse forests of pine and beech trees.

For many centuries, Sinjajevina has hosted seasonal mountain settlements locally known as katuns. Access to the katun commons pastures for summer grazing has been essential to the livelihoods of the people of Montenegro and a defining feature of many tribes in the country. The transhumance practice is based on the system of internal allocation of common grazing rights that are part of the ancient Montenegrin tribal system, governed by egalitarian assemblies. The Montenegrin tribal organizations are central to the history and culture of the country and have been officially recognized since the beginning of the 20th century.

Changes in the social and demographic structure within Montenegrin society in the second half of the 20th century led to the near abandonment of the katun system in Montenegro. The gradual demographic loss of people in the mountains endangered the preservation of traditional livelihoods on a national scale, and it threatened the sustainability and survival of the very systems that created, and continue to sustain, a unique and outstanding mountain natural and cultural heritage. In this context, Sinjajevina is especially critical.  It has experienced important demographic loss, but it still retains some of the best-conserved traditional examples of katuns in the country.

Sinjajevina includes the katun communities of livestock farmers from the municipal capitals of Savnik, Zabljak, Mojkovac and Kolasin, Danilovgrad, Bijelo Polje and Pljevlja. According to the studies of the Podgorica Agricultural Institute and others, the pasture of Sinjajevina can sustain the grazing of 10.000 cows and 70.000 sheep and their offspring during the four summer months.

At present, there is a growing scientific awareness that pastures governed by local communities offer a positive model for human livelihoods and for sustainable environmental management at a global scale, as millions of square kilometers around the world are managed adaptively in this way and provide numerous ecosystem benefits as well as sustaining important levels of biodiversity, soil retention, and carbon sequestration – our best and most natural tool in the fight against climate change. At the same time, this way of life provides highly meaningful livelihoods and is equitable in many ways. Nevertheless, pastoral systems are undergoing swift degradation processes worldwide for a variety of reasons: poor recognition of the value of the commons on which they depend, demographic changes, incentivized integration into the market economy, land grabbing by private companies or state agencies, changes in the power hierarchies between central powers and local communities, climate change, etc.

The livelihoods and extraordinary natural and cultural heritage that Sinjajevina supports include unique biodiversity, as well as ecosystem services on which both the local and distant communities rely upon. As for the multiple values of the landscape, this territory is connected at the East to the UNESCO Biosphere reserve protected canyon of Tara river. Moreover, to the North of Sinjajevina lies the most paradigmatic National Park of Montenegro, one of the oldest of the Balkans, which is also UNESCO World Heritage Site.

The Montenegrin state is fully conscious of Sinjajevina’s enormous cultural and natural values, because an extensive study was completed in May 2019 in support of its recognition as a protected area. The effort to create a natural park in Sinjajevina began in December 2013, with a project co-funded by the European Union. The EU covered 67% of the total budget of 290,494.47€, and the rest was provided by the Montenegrin state. The work went on for 35 months and resulted in a comprehensive overall study by the Environmental Protection Agency of Montenegro. The study included: a conservation analysis on which to base the declaration of the Natural Park; the establishment of a Manufacturers Association; the mapping of potential hiking, biking, skiing and eco-tourist sites; a feasibility study and technical design for the reconstruction of the road networks; the design of a functional inter-municipal mechanism to manage the proposed Sinjajevina Natural Park; an evaluation of the natural and cultural values of the territory; and a set of conclusions that recommended the area be offered an important level of protection. It is clear to many in Montenegro that the area has a future as a ‘territory of life’ where biological and cultural diversity interact, and where the Montenegrin communities can nourish a healthy and prosperous future. 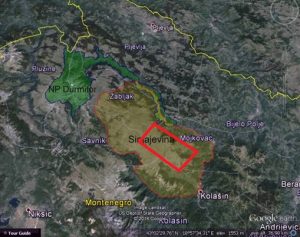 Despite all of the above, today Sinjajevina faces its most serious challenge ever… and a potential future as ‘territory of death and destruction’.  This irreplaceable area is threatened by the establishment of an artillery testing camp that would irreparably damage its unique socio-ecosystem and the living landscapes built over countless generations of Montenegrin pastoralists. 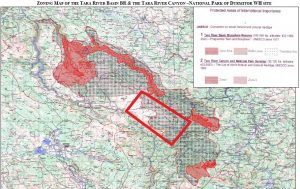 Polygon and UNESCO site in red.

With undue haste, and a worrying lack of transparency that has gone unexplained to the public, the Montenegrin state has suddenly changed its plan toward this outstanding area from protected area to bombing range,  a change most probably fueled by NATO military interests searching for “cheap” land to damage and destroy in ways the agency would not dare proposing in countries where the local communities have a stronger say in the political arena.

The pastoral communities that now govern the Sinjajevina highlands on the basis of their customary system of collective grazing rights, tribal identity, and traditional governance, have full title to enjoy the protections established under the United Nation Declaration on the Rights of Indigenous Peoples. Therefore, all national and international actors have the obligation to adopt the relevant procedures. The farmers and pastoralists of Sinjajevina have a right to Full, Prior and Informed Consent processes before any major new initiative with potentially irreparable consequences is conceived, let alone implemented.  The choice between maintaining these highlands in the outstanding natural conditions in which they are today, or turning them into a military artillery testing area, should be in the hands of the Sinjajevina communities.

In fact, the farmers, pastoralists, biodiversity lovers and allies of Sinjajevina are crystal clear in their wishes.  They are raising their voices to the sky to reach everyone who can possibly help. They need the support of the rest of the world to ask the Montenegrin state to STOP the artillery site and to reverse its destructive plan for Sinjajevina. They ask to promote and support its flourishing system of socio-ecological life that has taken thousands of years to evolve – instead of bombing it out of existence!

The authors of this article have created the SAVE SINJAJEVINA Association and are convinced that the only thing that can stop this atrocity is widespread awareness and massive support from the local, national and international community. You, the reader of this article, can support us all! We will soon share a petition to be signed and shared. For the time being, please forward this article and talk about us to your friends, neighbors, and colleagues. Send us your advice. You can reach us at this e mail address: sacuvajmosinjajevinu@gmail.com

Public demonstrations opposing the militarization of Sinjajevina have already started – the latest took place on September 20, 2019 in Montenegro- and will continue and intensify in the months ahead. We vow to continue organizing!  Please think of us and help as much as you can, in any way you can!